Bryan Park, like Richmond, is located on the geologic Fall Zone, where the hilly Piedmont drops down to the relatively flat Coastal Plain or Tidewater. 200 million years ago, when sea level was 125 feet higher, the Fall Zone was ocean-front.

Today, visitors can see signs of the Fall Line, or Zone, with its steep slopes, granite outcroppings, exposed granite bedrock in the Park’s streams, and waterfalls. In the late 1700s, early settlers built water-wheeled mills where the falling water could power stone grinding wheels for grain and corn. These mills, often in remote rural areas, became the trading and social centers of rural communities in colonial times, and granite was quarried in and around here in the late 1800s and early 1900s

Native American Indians have occupied the North American continent for at least 12,000 years. Archaic tribes occupied Virginia’s Tidewater region for about 6000 years, hunting, gathering and fighting over resources and territory. About 3000 years ago, tribes settled down to grow crops and live, for the most part, in peace with one another – during the Woodland period.

Curious about the Parks History? Do you know why Bryan Park is nationally significant, and why Bryan Park was placed on the National Register of Historic Places in 2002?

Friends of Bryan Park wrote an Illustrated History of Bryan Park in 2001, which examines the parks earliest history, the families associated with its 250 plus years of history, its main historic events (Gabriel’s Rebellion, Civil War action, Depression-era work programs, etc); its gift to the City as a memorial to Joseph Bryan in 1909, its 20th century development, and early Friends of Bryan Park history.

The 34 page book is lavishly illustrated, includes historic maps, environmental inventories, and more. It is given with every membership donation of $10 or more, or can be purchased for $6 each or three for $15 – which includes postage and handling.

Origins of the Friends of Bryan Park

By the 1990s, Bryan Park was in trouble. Surrounding suburban counties’s populations had grown steadily during the 1970s, 1980s and 1990s, while the City’s population and revenues declined. Bryan Park may have suffered the worst; it was cut off from the city on three sides by Interstates; its large size (266 acres) and many small roads winding back into remote back sections of the park harbored cruisers and illicit activities. City Park budgets were cut, and their staff’s suffered personnel and equipment shortages. Bryan Park’s reputation continued to decline.

To remedy the perceived problems, Richmond’s City Manager recommended the park become a revenue-generating 18-hole golf course. Many City and County residents opposed losing half the park to commercial development and fought the decision. The non-profit Friends of Bryan Park (FoBP) formed that year to fight the proposal. Over the next year, it persuaded City Council to postpone the proposal and study other, less destructive alternatives.

The next year, the Friends of Bryan Park’s legal counsel found the proposal to be illegal under the Bryan Family’s 1909 Deed of Gift of the Park to the City (it would trigger a reversion of the park property to the Bryan Family). Council relented, but told FoBP that they had three years in which to make positive things happen and turn it around, or it would take up the golf course proposal again. The Friends built the park’s first playground, and in 1996, they found a men’s soccer group (the Central Virginia Soccer Association, or CVSA) willing to raise the funds to build a 6-field complex. Soon, other park improvements (closing the back parts of the park off to vehicular traffic) improved park safety, and the park was locked up at night.

Increased public use of the park, playground, and soccer fields brought in people from the park’s neighborhoods Frequent park clean-ups, azalea-bed adoptions and annual tree plantings brought gardeners and environmentalists in, and, year after year, landscaping and shelter improvements, fundraising walks and runs, birders and dog-walkers increased the public’s use of the park, and drove most of the trouble out.

Friends of Bryan Park worked with VDOT and many community stakeholders to prevent the demolition of the Bellevue Bridge (the only direct connection between Richmond northside neighborhoods and the Park) in order to build a huge fly-over through the eastern portion of the Azalea Gardens.

Richmond Police propose to move City Horse Barn into Bryan Park Shelter 2 area. The Friends’ attorneys determined this too would violate the Deed of Gift from the Bryan family, and found that other State’s Courts had ruled against Police takings of other public park lands. The Police are urged to use vacant City land closer to downtown!

Richmond Police propose to move City Horse Barn into Bryan Park Shelter 2 area. The Friends’ attorneys determined this too would violate the Deed of Gift from the Bryan family, and found that other State’s Courts had ruled against Police takings of other public park lands. The Police are urged to use vacant City land closer to downtown! 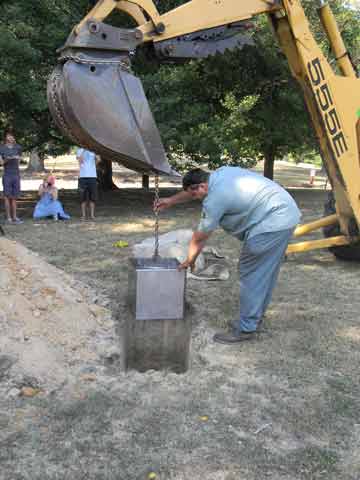 Friends of Bryan Park oppose a development proposal in the old Shirley subdivision, northwest of the planned Nature Center. It called for 34 pre-fab housing units and 56 townhouses, oriented around the perennial wetlands on the Cadmus property. Ultimately, the Friends helped raise the funds to purchase the 6.5 acres of vacant Shirley property.

Richmond Parks and Recreation renovates Shelter 2 for reuse as a Nature and Environmental education center, operated by FoBP. It opened in May, 2014, with more than 20 programs and classes offered before end of year; since then it averages 40 programs per year. FoBP also started planting native plant and pollinator beds adjacent to the Nature Center, and a nature trail for the visually and mobility impaired communities.

On Earth Day, Friends of Bryan Park place a permanent Conservation Easement on Shirley property with the Capital Region Land Conservancy, to ensure it will remain a forested buffer protecting the unspoiled stream and deep forest regime of Jordans’ Branch in perpetuity.

Projects large and small keep Friends of Bryan Park and Parks managers busy. We always need potential Board members, volunteers and azalea bed adopters, and charitable gifts. Please contact any officer for additional information, and review the list of projects to see if you can help.